The Workforce Diversity grant is designed to bring students from diverse communities into the College of Nursing and ultimately graduate them into the workforce. For Nauja Swann, who started her third year of college at Wayne State University in fall 2018, it's helping her achieve a childhood dream. 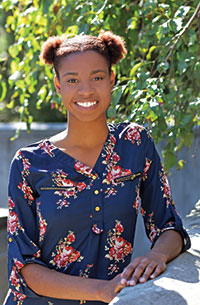 As a teenager in Detroit, Swann had the opportunity to visit a hospital and decided that a career in nursing was her goal.

"I really like helping people and I like hospitals," she said. "I know a lot of people are scared of hospitals, but I am amazed at the setting. So I thought it would be perfect."

Swann took a tour of Wayne State University and decided it was her "dream college." She applied and was accepted for the fall 2016 semester. While applying, an advisor suggested she apply for the Workforce Diversity grant, which allowed her direct admission into the College of Nursing.

"I'm really thankful they pointed me that direction," she said. "Timing wise, if I had stuck to my original plan, I would have already been enrolled and wouldn't have been eligible for the grant and would have had to apply for admission to the nursing school, so I was really thankful for that."

Swann said that the stipend has been the most beneficial part of the grant, as it's allowed her to live off campus. The relationships she's already been able to build with her advisor, future nursing professors and fellow students have also been immensely helpful.

"Receiving the grant has put me in a better position to be successful when I start my nursing courses," she said. "My advisor is great. I feel like having those regular meetings makes it easier to come to her when I'm having issues because she constantly knows what's going on. I really like our study groups because they bring me closer to the people going for the same thing.

"I've also become close with one of the professors I'm going to have in my nursing course next fall, which will make me more confident when I take that class. It really helped encourage my success because there's so much support that others don't have. I'm sure it would be much harder if I didn't."

Learn more about The Workforce Diversity grant in The New Face of Nursing.