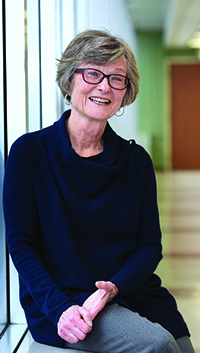 Dr. Joanne M. Pohl was the College of Nursing's 2018 Alumna of the Year. She has over 35 years' experience as a nurse practitioner, educator and researcher in primary care. "Throughout her career, Dr. Pohl has reflected a deep sense of community engagement as well as a commitment to improving the health of people locally and globally. She is everything we could want for our alumni to be," said Dean Laurie M. Lauzon Clabo.

Pohl has a long history of providing care in the urban community. When she relocated with her husband to the Detroit area from Minneapolis in 1974, she worked at Mom-and-Tots Community Center in the Planned Parenthood clinic. At the same time, she began her graduate work at Wayne State University in the primary care nurse practitioner program.

During her graduate work at WSU, Pohl received clinical experience in the College of Nursing's nurse-managed center, Primary Care Nursing Service at Detroit Receiving Hospital. Pohl says that experience shaped her career and commitment to primary care and nurse-led care for a lifetime. "It was in that practice - first as an NP student and then as WSU faculty and an NP graduate - that I experienced profound educational and clinical experiences that set me on my career and vocation trajectory of primary care and community-based health care. I also made important connections at WSU that would last a lifetime." Pohl said she came to WSU seeking a career but something additional happened. A vocation - which Pohl describes as where your soul's joy and the world's need meets - found her.

Once Pohl completed her master's degree, she continued at Wayne State as a faculty member in the college's adult nurse practitioner program and as a nurse practitioner at the University Health Center Primary Care Nursing Service, the state's first nurse-managed center and one of the first in the country. The center was important to the Wayne State community, especially to many underserved, underinsured
populations. Pohl notes that in nurse-managed centers, students find what they learn in the classroom actually practiced in the clinical setting. Primary Care Nursing Service was one model of primary care in the University Health Center and there was rich collaboration among the disciplines during those years (1979-90).

In 1981, Pohl took a leave from WSU and Primary Care Nursing Service to go with her husband on a sabbatical to the Philippines, bringing their then-young children along. It was during this time that Pohl began to understand primary health care needs within a developing country. While there, she taught psychology and sociology courses, practiced in a rural family practice (in a room attached to the physician's house), and - most importantly - learned to trust her clinical skills when, for example, technology was not available to conduct such basic things as X-rays and laboratory work. Between her education at Wayne State and her global service, a critical lesson Pohl learned is that, "No one discipline can do it alone. Working together, and with the community, makes it better for whomever you are serving." She also learned that primary care and strong public health departments are the foundation of a robust health care system.

The critical years at Wayne State set her professional course. When she left to join the faculty at Michigan State University, Pohl kept the community aspect of her vocation a priority and - working with the local health department - opened a clinic serving the homeless population in Lansing with federal funds. The key, Pohl notes, was interprofessional teamwork. The clinic in Lansing ultimately became a large Federally Qualified Health Center that still exists today.

After completing her Ph.D., Pohl joined the faculty at the University of Michigan where, for the next 20 years, she initially directed the Adult Nurse Practitioner program and then was named associate dean for Community Partnerships. Now a University of Michigan School of Nursing professor emerita, she continues making a global impact on nursing, focusing on Haiti. She is president of the Haiti Nursing Foundation in the U.S. Following successful implementation of a B.S.N. program, she is currently working on bringing an M.S.N. program to the country.

The breadth of Pohl's research includes family caregiving; tobacco cessation with vulnerable populations; and, for the last 15 years of her career, a focus on outcomes of care, cost of care, community responses and student experiences in nurse-managed health centers. Her funded research on nurse-managed health centers was a collaborative effort between the WSU College of Nursing faculty and the University of Michigan, Michigan State University, Grand Valley State University, and Michigan Public Health Institute. She says that her early connections with Wayne State remained throughout her career. She and this team disseminated their work broadly and published extensively.

Over the years, Pohl was highly involved in policy work at the state and national levels related to the recognition of nurse practitioners and access to health care for the nation. She was often an invited speaker in numerous venues across disciplines.

Pohl acknowledges that along the way, she received enormous support and mentoring from colleagues - many at Wayne State - for which she is most grateful. Committed to improving nursing care for all, she has served on many boards that develop and effect nursing standards, policy, education and access. She currently serves on the Washtenaw County Board of Health.

Pohl noted, "Dean Clabo and President Wilson's work on urban health is so important. I am so honored to receive the distinguished alumni award and recognition from WSU. But even more than being thankful for this award, I am most thankful that WSU College of Nursing was here in 1974 and is still here, committed to quality education for nurses, and committed to the community, primary care and urban health."